Back when I started to consider special rifles as dedicated varmint rifles, we were rebuilding WW II 03A3 Springfield’s into target stocked 30-06 long range wood chuck shooters.

At the time most varmint type rifles were not much more then somewhat upgrade glass sight standard bolt action rifles, and among them were the Remington Model 700’s. A few military Mauser’s, and also some additional Winchester Model 70’s. After that the viewing screen goes black, and in most cases save for a very few custom rifles in hot cartridge calibers shooting stayed to about 300 yards max, and the varmint hunter as a major element in shooting sports largely didn’t exist in many areas of the USA.

Jump ahead some three decades form those early days of varmint shooting and we see an industry that is very dependent on the sales and advancement of the modern varmint rifle. This rifle is classes as mission specific in that it is always built for extreme accuracy, and is chambered for a cartridge that is very fast, flat shooting, and much of the time offered in the 22 caliber group of bullets.

I have stated the works “ much of the time”, because as the range of operations among varmint hunters grows of late the rifle calibers and bullet types have also been changing a good bit.

During the past year I observed brand new 22 caliber cartridges, and also 6 mm rounds make successful one shot kills out of 1000 yards on coyotes in the open country of western South Dakota.  Watch this in real time and you start to see that again the modern varmint rifle is heading for some major advanced changes from the old school 300 yard rat shooter, or coyote rifle of yesteryear.

All that stated, when looking into the question as to what are eight of the top end varmint rifles offered to shooters today? The answer is not one to come about easily, or be taken lighting without offending someone in the industry, being their product was not on the cutting edge list in the final annalists.

However, the question needs to be addressed and be advised the price tags on most of my choices are not in the bargain basement of the retail store, and in some cases not even over the counter, but a custom ordered product to be sure. Some of the information here is based on the latest offerings as illustrated at the great American Shot Show 2020.

My first choice in the exceptional varmint rifle today is offered by the folks at H.S Precision located in Rapid City South Dakota. It is not that because these people are building rifles in my back yard that I address them, but it is because western South Dakota is a hot bed of firearms construction and development, and well known among both civilian and military quarters alike.

H.S Precision will build you a turn bolt Mauser ( based ) action rifle that retains a long extractor in the Mauser style, cut rifled barrel as they ratins much of the tooling used during the war right at their manufacturing locations, and will build you exactly what you want in terms of chambering and special requirements. As an example of how custom this company is today they will chamber the new .224 Valkyrie, being a cartridge that is currently offered almost exclusively in AR-15 platforms simply at the buyers request. I have indicated and singled out this cartridge because in bolt guns it just can’t be found unless custom made, and in this case that builder is H.S Precision.

Ultra high end receivers CNC cut in house, carful gunsmith crafted details to stocks and bedding make these rifles tack hole one hole group shooters when checked out in the field, or under accuracy testing conditions.  H.S composite stocks are so well known that they are offered on many other manufactures rifles, as well as the home grown Precision rifle.  The final note here is that H.S. Precision rifles are ordered by marksmen within units of the FBI, and that is quite an endorsement in and of itself.  Everything coming out of this manufacture is without question sniper grade weapons material. There for I put this builder as right in the top eight manufactures offering classic and accurate sniper  / varmint grade rifles today.

As a heavy hitter in the big league long range department, I am turning to the new Barrett designed bolt action chassis rifles. During the American SHOT SHOW 2019 I shot this rifle for test at 1000 yards. These rifles are the new Barrett MRAD turn bolts that have been designed for ultra long range work, and the partner rifle in the Model 98B Tactical which also fits the same grouping of rifle design offerings.

Shooting the Barrett turn bolt for test I was handed a rifle chambered in the 300 Norma Magnum round, in a Peterson custom loaded very high BC bullet, the only issue I had was that Barrett’s line judge during my testing phase gave me three rounds and insisted on shooting the first two at a 500 yard target which was child play with this rifle. When I got to the 1,110 yard target I miss judged my wind and sent the shot just off the right side of the steel target and a foot low. I asked for another round as I knew I would pop the steel dead on, but was denied the shot.

It's nice rifle in the MRAD design, but not enough time on the gun in my opinion for a workable evaluation regarding accuracy. This rifle will allow changing out the barrel for another caliber, and supports a Mil-Spec receiver and chassis system that meets war fighter, and the advanced predator hunters requirements. The Berrett is a prime example of the new generation of ultra long range varmint rigs coming into the market place today. 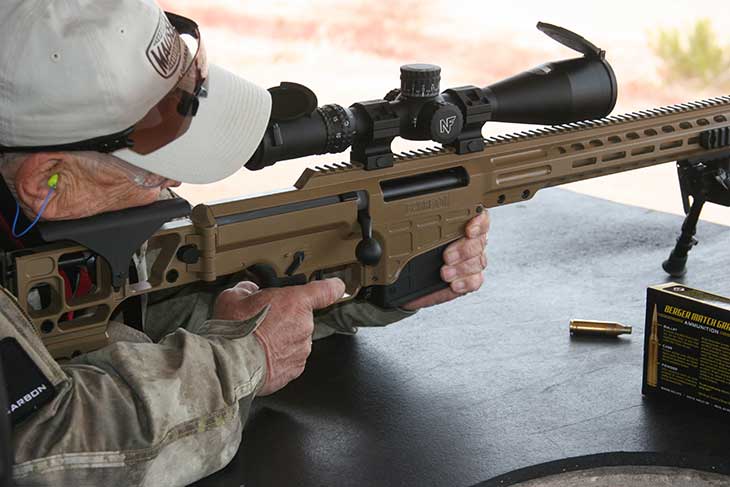 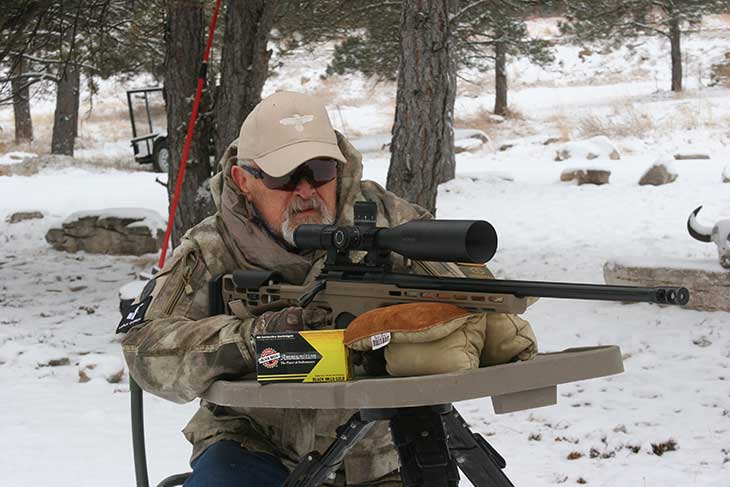 When considering a rifle with a lower price point then some others, but still offering a solid main frame that is accurate as well, I tuned my attention toward the new Thompson Center LRR Performance Center bolt action rifle.

This rifle comes out of the Smith & Wesson custom shops and is built one at a time by Smith for their partnered company T/C. Offered as a chassis rifle in 308 or 6.5 Creedmoor the rifle is a bench style chassis rifle with a fluted barrel that retains a flash hinder muzzle break and is set up for a suppressor straight out of the box.  The short form is that this rifle is offered straight out of the box with features that will cost the shooter thousands of dollars more in other brands. This rifle is a solid product and a great by at under $700.00. MSRP.

In terms of performance I can say a whole lot about the new design because I have been testing it for the past several months here is South Dakota prior to its release. Using the AI style magazine and mounting a double shoe target trigger, the rifle shoots sub M.O.A.  groups by way of Black Hills 6.5 Creedmoor 120 grain Hornady GMX bullets to 100 yards, it is a solid choice for a 1000 yard rifle that can take coyotes to any desired range in between. 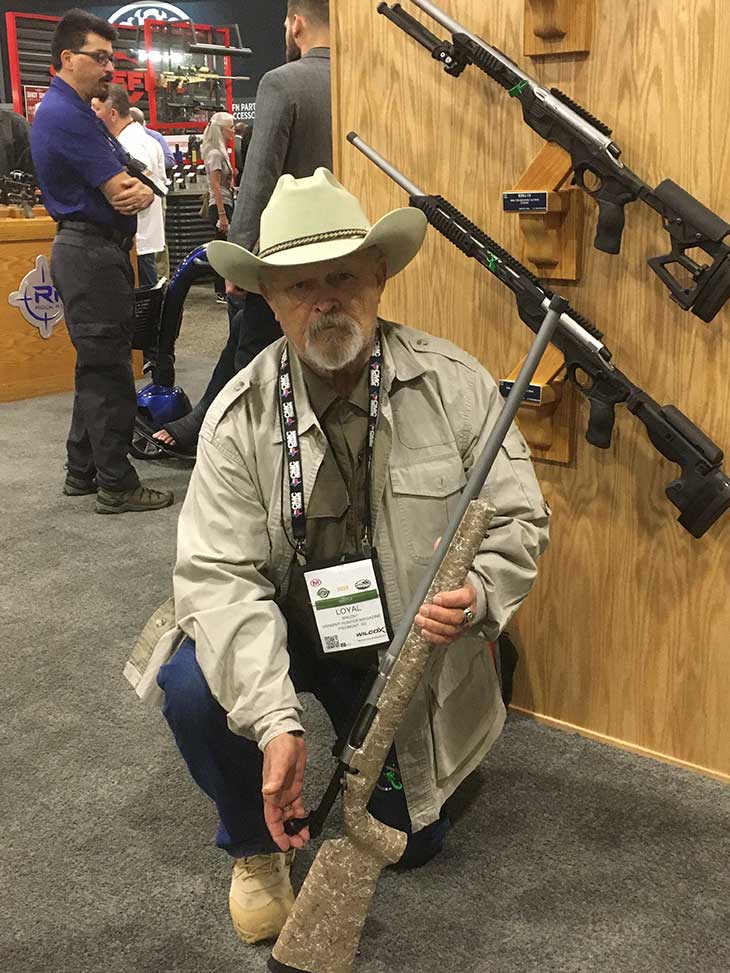 With the changing times even some hard nosed AR builders are turning to bolt action rifles as a secondary product line. RRA, or Rock River Arms is about to offer a new bolt action rifle dressed as a chassis rifle, or standard stocked ( varmint style) regarding selected furniture. This rifle action housed in a  McMillan stock,  or all metal chassis package is a nice looking and well designed rifle package judging by what I observed.

This rifle will be dealer shelf ready within six months of this written review. Cartridge offering at this time will be 308 Winchester or 6.5 Creedmoor for starters. This rifle will not be classed as a starter rifle for a varmint hunter however.  At the price point like many others, it will be retailing at over $4000 MSRP. 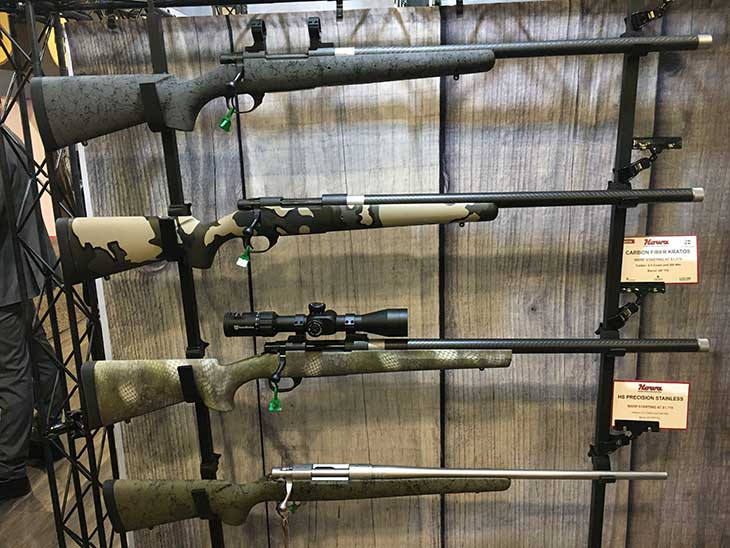 Wanting to still pay the mortgage, but also buy a new varmint rig?  A turn toward Howa could be a good choice in rifles. Howa is the action selected for the Weatherby Back Country, therefor don’t even think about regarding this rifle builders product options as something less than the high priced options, being they are in a class that a working man can afford.

New this year is the  Howa *HS Precision stocked Carbon Fiber in a carbon fiber wrapped barrel. This rifle is only offered in 6.5 Creedmoor, and for the most part that is about all that seems to be required of late.  Howa is also marketing the TSP X Folding Chassis rifle, and the KUIU Verde 2.0 , or Vias 2.0 with a Game Keeper 3.5-10-44 scope included . The classic stocked rifles retain the Cerakote finish in camo patterns, and are offered in 22-250 Rem, 243 Win, and 6.5 Creedmoor. All three of these rifles  come with a sub M.O.A, guarantee, and a life time warranty regarding the owner.

I have tested Howa rifles for up to six months out here in the wild west covering several varied models of the rifle. In short, all have passed the acid test in terms of gunning varmints and predators out on the wide open prairies, or over watch locations in the mountains.

Today shooting 1000 yard target is not even a close issue as applied to many of the modern rifles and cartridges coming into the market place.

Turning to CZ  USA, the line offered this year by them includes the well built and balanced CZ 527 American as chambered in .17 Hornet, 22 Hornet, 223 Remington, 204 Ruger, 6.5 Grendel and last the Russian 7.62X39. There are six different models of this rifle presented by CZ and they will range from heavy varmint stocked rifles to suppressor ready models. With three models all in walnut stocks but it should be advised that moving into the 557 American by CZ you will find synthetic furniture as well.

These rifles are short action, designed expressly for varmint cartridge of a more traditional type, and in my gun safe these rifles are made up of a .221 Fireball, and a .223 Remington. If you want a light fast handling calling rifle or walking rig, these are the clear way to go.

As a  final option when it comes to fur taking and heart breaking predator hunting systems, the news regarding Weatherby’s move to Wyoming and the development of the new 6.5 RPM, moves the old standard Weatherby Back Country right into the for front of high performance thunder sticks. Weatherby has even designated all serial numbers with the starter “WY” indicating that this and all future rifles are built in the gun friendly state.

Shooting the Vanguard Back Country for the past decade in the 257 Weatherby, I have found the rifle to be among my very favorite when it comes to a combination big game and fur taking system. Adding the 6.5 to the list of rifle options by this company has just moved up the Weatherby brand and standard one more step up the ladder of performance rated rifles.